Immortalized by a clever poem that portrayed her as Sir William Howe’s Philadelphia mistress, the real Elizabeth Loring lived a far less glamorous life than that of the “blond bombshell” as she is often depicted.

“The poem was probably propaganda and its source is highly suspect,” said historian Sean Heuvel at the May 17, 2017 meeting of the American Revolution Round Table of Richmond. “During the Winter of 1777-1778 she was in Philadelphia with Howe and something probably happened, but the story was much more complicated.”

The poem, called The Battle of the Kegs, was written by Francis Hopkinson, a signer of the Declaration of Independence. It goes as follows:

Sir William he,
snug as a flea,
Lay all this time a snoring,
Nor dreamed of harm
as he lay warm,
In bed with Mrs. Loring.

Another critic of Elizabeth Loring’s was a loyalist judge named Thomas Jones who wrote approximately 10 years after the American Revolution about how the alleged affair between Howe and Mrs. Loring had cost Great Britain the war. He portrayed Mrs. Loring as a Cleopatra figure and wrote, “As Cleopatra of old lost Mark Antony the world, so did this illustrious courtesan lose Sir William Howe the honour, the laurels, and the glory, of putting an end to one of the most obstinate rebellions that ever existed.”

“As a loyalist who was on the losing side of the American Revolution, he was venting lots of frustration,”said Heuvel. “It’s also believed that he loved to drink and to gamble. There aren’t enough primary sources for historians to tell what really happened between Howe and Mrs. Loring but the loyalist judge’s accusations are probably myths.”

What do today’s historians know about Elizabeth Loring? According to Heuvel, she lived a very difficult life.

Elizabeth Lloyd Loring was from Long Island, NY and married Joshua Loring, Jr. who was from Jamaica Plain (modern-day Roxbury, MA). His father served as an admiral in the British navy during the French and Indian War, and got wounded on Lake Ontario.

Joshua Loring, Jr. served in the British army as a lieutenant on the staff of Colonel William Howe in Savannah, GA. Loring left the British army in 1769 for health reasons after getting sick from tropical diseases.

Wearing a disguise, Elizabeth Loring went back through enemy lines to see her children. One of her twins had died but the other one was later reunited with his parents in Boston per an agreement approved by Thomas Gage and George Washington.

“There are two versions as to how Loring treated American POWs,” said Heuvel. “One story is how Loring was very cruel and stole from the prisoners. The other version says that he did the best he could under the circumstances.”

Following a series of battles near Philadelphia, the American army abandoned the city and then the British army occupied it through the Winter of 1777-78. It was during this time period when Francis Hopkinson wrote what would become his famous poem about Howe and Mrs. Loring.

When the war ended, Great Britain became the Lorings’ new home. They, like many other loyalists, were not widely accepted by the British natives.

In 1789 Joshua Loring, Jr. died at the age of 44 after several years of declining health. He left Elizabeth with four children and virtually no money. She applied for a pension because her husband had served in the British army, and received one.

Her oldest surviving son, John Wentworth Loring, joined the British navy in order to support his mother and siblings. He worked his way up the ranks and became a ship captain who earned a large amount of prize money by capturing enemy vessels.

As for Elizabeth Loring’s life in Great Britain, not much is known about her. Today’s historians have only two letters written by her---one from when she was a child and the other which she wrote to her adult children.

“In the letter to her children she worried about keeping up with the Jones,” said Heuvel.

Sean Heuvel is an assistant professor in the Department of Leadership and American Studies at Christopher Newport University. He served as the founding president of the American Revolution Round Table of Williamsburg/Yorktown.

His interests include the American Revolution, the Civil War, World War II, military leadership and higher education history. He is the author or co-author of the following books:

2. Life After J.E.B. Stuart: The Memoirs of His Granddaughter, Marrow Stuart Smith

4. The College of William and Mary in the Civil War

Prior to the speaker’s presentation the American Revolution Round Table of Richmond discussed the nominations which members submitted to President Bill Welsch regarding this year’s ARRT-Richmond Preservation Partner. Four non-profit organizations were nominated. President Welsch said that each dues-paying member of ARRT-Richmond will get the opportunity sometime in July to vote online for one of the four nominees.

Larrie D. Ferreiro, Brothers at Arms: American Independence and the Men of France and Spain Who Saved It (New York: Knopf, 2016).

The following is from Sarah Whiting and St. John's: 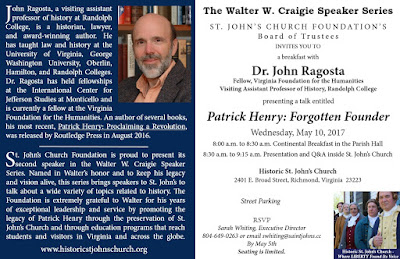 Posted by hmgroth at 1:39 PM No comments:

Email ThisBlogThis!Share to TwitterShare to FacebookShare to Pinterest
Newer Posts Older Posts Home
Subscribe to: Posts (Atom)
The American Revolution Round Table of Richmond is devoted to the study of all aspects of the Revolutionary period (ca. 1763-89). Composed of a group of eclectic, yet historically-minded individuals, the ARRT-R provides a forum for the exploration, discussion, and sharing of knowledge about this interesting and critical period of our history. All are welcome to participate in this enlightening and enjoyable pursuit, regardless of knowledge level.