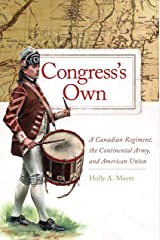 At our next meeting Holly Mayer will speak about Congress's Own: A Canadian Regiment, the Continental Army, and American Union.

This will again be a Zoom meeting. Log-in details will be in our September newsletter.

details will be provided in the May newsletter.  Thanks again to Peggy Watson for

allowing us to utilize the Osher network.

Dr. Robert A. Selig will be our July 21st speaker, presenting virtually on “Do You Believe in Magic? Spells and Witchcraft during the American War of Independence”.

Dr. Selig is a historical consultant who received his Ph. D. in history from the Universitat Wurzburg in Germany in 1988. He has published a number of books on the American War of Independence such as Hussars in Lebanon! A Connecticut Towns and Lauzan’s Legion during the American Revolution, 1780-1781 and a translation of A Treatise on Partisan Warfare by Johann von Ewald.  Dr. Selig is a specialist on the role of French forces under Count de Rochambeau during the American Revolutionary War and serves as a project historian to the National Park Service for the Washington-Rochambeau Revolutionary Route National Historic Trail

Guest Speaker – Jack Kelly – “Valcour: The 1776 Campaign That Saved the Cause of Liberty”

Mr. Kelly is an award-winning author and historian.  His books include “Band of Giants:  The Amateur Soldiers Who Won America’s Independence”, which received the DAR History Medal.  He is also the author of “The Edge of Anarchy”, “Heaven’s Ditch”, and “Gunpowder” and is a New York Foundation for the Arts fellow in Nonfiction Literature.  Kelly has appeared on The History Channel, National Public Radio, and C-Span.  He lives in New York’s Hudson Valley.

Mr. Kelly believes “Valcour” is the most important, unknown battle of the American Revolution.

Mr. Kelly considers “Valcour” to be unknown because of the instrumental role Benedict Arnold played in the battle and that covering a battle that occurs on water is very complicated.

In the spring of 1776, the American Army after returning from Canada was suffering through a

small-pox outbreak that rendered a substantial amount of its manpower combat in-effective.

American leaders knew that if the British regained naval superiority on Lake Champlain they could use the lake as a highway allowing them to transport men and supplies south to Fort Ticonderoga.  If the British re-took Fort Ticonderoga they could more south down the Hudson Valley to Albany and then on towards New York City.  Control of the lake might also allow British forces to move east off the lake into New Hampshire and towards Boston.

The naval threat on Lake Champlain caused an arms race as both the Americans and British hurried to build fleets.

The three American general officers leading the effort where General Philip Schuyler, General Horatio Gates, and General Benedict Arnold.  General Schuyler provided logistical expertise including moving naval stores to the lake.  General Gates provided administrative experience that allowed him to handle the small pox outbreak, improve morale, and impose stricter discipline on the army.  General Arnold brought sailing experience and was a proven combat leader who was able to inspire the men serving under him.  In addition, Arnold was familiar with the area based upon his experience traveling through the area before the war.

In 1776 Gates and Arnold got along well. General Gates was serving as the Army’s operational commander and appointed General Arnold as it’s “Fleet Commander”.  In this role General Arnold was responsible for building the fleet and leading it into battle.

“Building a Fleet in the Wilderness” required logistical feats such as moving naval stores through the woods and trails of eastern New York and enticing skilled labor to move from the Atlantic coast to the shores of Lake Champlain.

American fleet construction was centered on row galleys and gunboats while the British under General Carleton labored to construct a frigate, “Inflexible”.

In late August, Arnold moved the American Fleet north in an effort to locate Carleton’s fleet.  However on September 30th Arnold moved his fleet south to the west-side of Valcour Island.  This move offered protection from bad weather and allowed Arnold to hide his inferior force from the British.

On October 11th the British fleet passed Valcour Island to the east.  Once the British fleet was south of the island Arnold began the battle forcing the British fleet to maneuver north.  Combat lasted for hours but eventually British naval superiority began to win the day.  Near sunset, the Inflexible was finally able to join the fight and the American fleet was defeated.  During the night Arnold sailed south with what was left of his fleet.

While Arnold lost the battle on October 11th his efforts caused Carlton to stop at Crown Point for 2 weeks.  Once the first snow reached Lake Champlain at the end of October, Carleton made the decision that the campaign was over and moved his army back north to Canada.

In the eyes of Mr. Kelly if Arnold hadn’t built a fleet which he lead tenaciously at “Valcour”

Carlton would have sailed south and seized Fort Ticonderoga.  From Fort Ticonderoga, Carleton could have then moved south down the Hudson, meeting the Howe brothers in New York, and assisting in the destruction of Washington’s Army.  This would have ended the American Revolution in last months of 1776.

Immerse yourself in Francis Marion's world and the significance of the Southern Campaign of the American Revolution.

Email ThisBlogThis!Share to TwitterShare to FacebookShare to Pinterest
Labels: Events

Following are the books nominated for the 2021 Harry M. Ward Book Prize:

T. Cole Jones, Captives of Liberty Prisoners of War and the Politics of Vengeance in the American Revolution (Philadelphia: University of Pennsylvania Press, 2019).
Posted by hmgroth at 4:21 PM No comments:

Posted by hmgroth at 1:43 PM No comments:

Email ThisBlogThis!Share to TwitterShare to FacebookShare to Pinterest
Labels: Events

Our Calendar is Filling Out

In addition to Bob Selig speaking at our July 21 Zoom meeting, Holly Mayer will speak at our September 15 meeting on the topic of Congress's Own, a Canadian Regiment. This meeting will most likely also be on Zoom, but stay tuned!

Colonel Moses Hazen’s 2nd Canadian Regiment was one of the first “national” regiments in the American army. Created by the Continental Congress, it drew members from Canada, eleven states, and foreign forces. “Congress’s Own” was among the most culturally, ethnically, and regionally diverse of the Continental Army’s regiments—a distinction that makes it an apt reflection of the union that was struggling to create a nation.The 2nd Canadian, like the larger army, represented and pushed the transition from a colonial, continental alliance to a national association. The problems the regiment raised and encountered underscored the complications of managing a confederation of states and troops.In this enterprising study of an intriguing and at times “infernal” regiment, Holly A. Mayer marshals personal and official accounts—from the letters and journals of Continentals and congressmen to the pension applications of veterans and their widows—to reveal what the personal passions, hardships, and accommodations of the 2nd Canadian can tell us about the greater military and civil dynamics of the American Revolution. Congress’s Own follows congressmen, commanders, and soldiers through the Revolutionary War as the regiment’s story shifts from tents and trenches to the halls of power and back.Interweaving insights from borderlands and community studies with military history, Mayer tracks key battles and traces debates that raged within the Revolution’s military and political borderlands wherein subjects became rebels, soldiers, and citizens. Her book offers fresh, vivid accounts of the Revolution that disclose how “Congress’s Own” regiment embodied the dreams, diversity, and divisions within and between the Continental Army, Congress, and the emergent union of states during the War for American Independence.

Posted by hmgroth at 1:39 PM No comments:

details will be provided in the May newsletter.  Thanks again to Peggy Watson for allowing us to utilize the Osher network.

Jack Kelly will be our May 19 speaker, presenting virtually on his new book “Valcour: The 1776 Campaign That Saved the Cause of Liberty.”

Mr. Kelly is an award-winning author and historian.  His books include Band of Giants: The Amateur Soldiers Who Won America’s Independence, which received the DAR History Medal.  He is also the author of The Edge of Anarchy, Heaven’s Ditch, and Gunpowder and is a New York Foundation for the Arts fellow in Nonfiction Literature.  Kelly has appeared on The History Channel, National Public Radio, and C-Span.  He lives in New York’s Hudson Valley.

r. Ecelbarger is the author of seven books on the Civil War and Lincoln.  He is an experienced tour guide of Revolutionary War and Civil War sites and is authoring a campaign biography of Washington during the struggle for Philadelphia.  He’s also an ARRT-Richmond member and a long-time friend.

Washington to the Continental Congress – September 10 from Chad’s Ford:

“The Enemy are now lying near Kennets Square and in a tolerably compact body. They have parties advanced on the Lancaster Road and on those leading over this Ford & to Wilmington.  Maneuvering  appears to be their plan; I hope, not with-standing, that we shall be able to find out their real – intended route & to defeat their purposes . . .”

Challenges in Defining the Continental Army in late August/early September 1777:

Types and quality of arms

How Many Continental’s in Delaware?

Posted by hmgroth at 7:04 PM No comments:

Email ThisBlogThis!Share to TwitterShare to FacebookShare to Pinterest
Labels: Meeting Notes 2021
Older Posts Home
Subscribe to: Posts (Atom)
The American Revolution Round Table of Richmond is devoted to the study of all aspects of the Revolutionary period (ca. 1763-89). Composed of a group of eclectic, yet historically-minded individuals, the ARRT-R provides a forum for the exploration, discussion, and sharing of knowledge about this interesting and critical period of our history. All are welcome to participate in this enlightening and enjoyable pursuit, regardless of knowledge level.