"The Battle of Paoli," Jim Christ 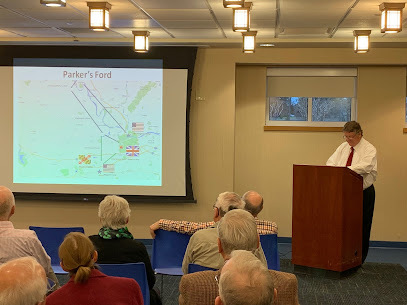 The March 16, 2022 Meeting was held at Glen Allen - Henrico County Public Library and featured a presentation by Jim Christ entitled "The Battle of Paoli." Jim is the President of the Paoli Battlefield Preservation Fund, Vice President of both the American Revolution Round Table of Philadelphia, and the Brandywine Valley Civil War Round Table.

Christ's presentation on the battle was well received by the members present as he explained the events on the night of September 20, 1777, in the area surrounding present-day Malvern, Pennsylvania, and was one in a series of American Revolutionary War conflicts, that became known as the Philadelphia Campaign. That campaign was initiated by the British to gain control of Philadelphia, then the seat of the Second Continental Congress.

Christ spoke about the commanders on both sides and the plans they made--especially the expectations of American Brigadier General Anthony Wayne and British General Sir William Howe, as Commander-in-Chief, North America.

On September 11, 1777, Wayne had commanded the Pennsylvania Line at the Battle of Brandywine, where they held off General Wilhelm von Knyphausen who commanded Hessian auxiliaries on behalf of Great Britain. Wayne was ordered to retreat ending the battle. He was then ordered to harass the British rear to slow Howe's advance towards Pennsylvania. Christ then discussed the Paoli attack itself and the role of Major General Charles Grey who led around 2,000 men into the Great Valley to surprise over 2,000 of Wayne's men and 2,100 Maryland Militia under General William Smallwood. Grey became known as "No-flint Grey" for ordering his men to extract the flints from their muskets during the nighttime surprise approach and to fight with bayonets only. While there were relatively few American casualties, claims were made that the British took no prisoners and granted no quarter, and the engagement became known as the "Paoli Massacre" and “Remember Paoli” became America’s first battle cry. As historian and author Robert M. Dunkerly observed in his January 19, 2022, presentation to the Roundtable "Decision at Brandywine: The Battle on Birmingham Hill," eighteenth-century combat was brutal and random in its violence. Wayne's own reputation was tarnished by the American losses at Paoli, and he demanded a formal inquiry to clear his battlefield decisions. Christ explained the aftermath of the fighting and spent considerable time on the court martial of Wayne, which Wayne himself had demanded and eventually resulted in his exoneration.

The ninth bloodiest battle of the Revolutionary War left Philadelphia open to British occupation. The British captured Philadelphia two weeks later on September 26, resulting in the city falling under British control for nine months, until June of 1778.

Howe resigned during the occupation of Philadelphia and was replaced by his second-in-command, General Sir Henry Clinton. Although Wayne's reputation suffered due to his defeat in the Battle of Paoli, he later earned praise for leadership successes before the end of the war.