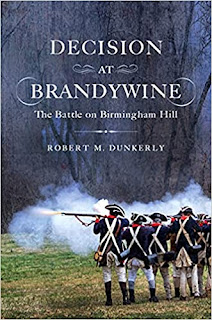 For our next meeting we are pleased to have our own Bert Dunkerly to present "Decision at Brandywine: The Battle on Birmingham Hill," based on his latest book of the same name.
The Battle of Brandywine, fought on September 11, 1777, along its namesake creek in the bucolic Pennsylvania countryside, was one of the largest engagements of the Revolutionary War. To those who participated in this massive battle, spread out over ten square miles and lasting from late afternoon until dark, it was unforgettable. Soon after the action, Major Joseph Bloomfield of the 3rd New Jersey recorded that it was “the grandest scene I ever saw, a sight beyond description.” Brandywine was the first major battle for the recently reorganized Continental Army. Units had fought in small engagements, but not until Brandywine did the army fight as a whole against the British. As the two armies clashed, a ferocious and desperate action developed on a hill at the heart of the battlefield, and it was here where the battle’s outcome was determined.
Despite its size and significance—Brandywine was the third bloodiest engagement of the war, with 1,300 American and 581 British casualties—the battle has been the subject of very few studies. In Decision at Brandywine: The Battle on Birmingham Hill, historian Robert M. Dunkerly analyzes the fighting near the Birmingham Meeting House where the battle turned. By dissecting the struggle on Birmingham Hill in detail, he offers a case study in weapons, tactics, and terrain analysis critical to a holistic understanding of the entire battle and what it would mean for the future of the Continental Army. In the process he not only explains how the Continental Army’s lack of uniformed training and inexperience in large open-field battles played a major role in their defeat, but also provides important information about Revolutionary War combat in general. (Source: Amazon.com)
Robert M. (Bert) Dunkerly is a historian, award-winning author, and speaker who is actively involved in historic preservation and research.  He holds a degree in History from St. Vincent College and a Masters in Historic Preservation from Middle Tennessee State University.  He has worked at fourteen historic sites, written over a dozen books, and numerous scholarly articles.  His research includes archaeology, colonial life, military history, and historic commemoration.  He is a past President of the Richmond Civil War Round Table and serves on the Preservation Commission for the American Revolution Round Table of Richmond.  He has taught courses at Central Virginia Community College, the University of Richmond, and the Virginia Historical Society.  Dunkerly is currently a Park Ranger at Richmond National Battlefield Park.  He has visited over 500 battlefields and over 1000 historic sites worldwide.  He enjoys exploring local bookstores, battlefields, and breweries, not necessarily in that order.
Our meeting will be held in-person only, beginning at 6:30 p.m., at the Gayton Branch of the Henrico County Library (about ten minutes from the University of Richmond):
10600 Gayton Road
Henrico, VA 23238
https://henricolibrary.org/gayton
At this time, masks are still required inside the library. This may change between now and our meeting.
Posted by hmgroth at 2:52 PM